It’s been a while since I’ve had the opportunity to get online and plead for sympathy from you people.  Hope life has been good to you.  I continue to sit in a world of torture.

It’s bad enough I can’t sit on the tables, I can’t sit on the chair.  She gives me this shelf so that I can dance like a monkey through the window.  That’s about it.  The sad-eyed sympathizers come in to snuggle with me, and rub my ears.  I had a moment where I let myself daydream that my rescuers would come, and identify themselves through some sort of Morse Code when they pet me, so that I understand the message and play along.  Something along the lines of i-m–h-e-r-e–t-o–s-a-v-e–y-o-u–i–h-a-v-e–w-e-t–f-o-o-d–i-n–t-h-e–c-a-r.  So I spent an entire day trying to decode every single butt scratch I received…apparently this system isn’t working; my rescuers have yet to identify themselves, or there is a sick, delusional brood walking into this place.  All day I received messages such as:

…they seem to say.

Sadly, there was one full-on false alarm.  Someone came in with what I thought was a feline flare of attention, to seemingly summon me to their makeshift escape pod.  She walked in unassuming, gave me the usual greeting, and I could have sworn I saw her wink at me, as if to say, “GET IN THE BAG!”

Well, opportunity only knocks once, or so I hear, so I decided to go for it.  She walked away from the escape pod, and carried on a diversional conversation with Mom.  Leading her attention elsewhere, I knew this was my chance.  She had spiked the escape pod with a scent beacon so that I knew exactly how to board the craft and take safe passage from this place.  I huffed, I puffed…..ready…..steady……here we go….this is the ultimate Moment of TRUTH! 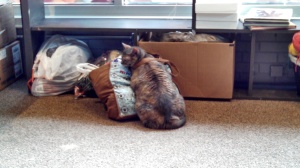 Not only was it NOT an escape pod, it was a sick joke.  It was a snare trap, filled to the brim with catnip toys, and it grabbed me and assaulted me and wouldn’t let go until I begged for mercy.  It was a booby trap!  They claimed it was a bag full of catnip toys to be sold at the store, but I know the truth.  It was a test.  A test I miserably failed.  A display of humiliation that I may never get over.  And I was intoxicated for the rest of the evening.  It’s  just not fair.

All this occurred under the guise of a “Spin-In”, an evening where those who steal my dignity get together and spin yarn that I can’t eat with wheels that I can’t lick or paw – I know, I’ve tried.

The end of September met with the closing of the summer’s fiber festivals, starting with the newest addition to the area, the McHenry County Spring Fiber Fling.  Mom got a chance to visit, and of course left me all alone, so I can only describe what she talks about when she tells people this is the first of many exciting years to come for the fair that is held at the McHenry County Fairgrounds.  Along with several alpaca farms, many independent yarn shops and hand-dyers attend with booths, and no one goes away empty handed.  This year there was a booth where fiber artists were reeling silk right from the cocoon, and one could learn the entire lifespan of a silkworm, and the long process of getting silk from the worm to its processed form.

Stitches Midwest was another annual favorite, although it was reported that this year was a bit smaller, the biggest hits were the Bavarian Twisted Stitch workshop and Knitting with Silk Hankies Demonstration.

Just a few weeks back, we wrapped with Wisconsin Sheep & Wool, which is held in Jefferson and guides the visitor through the fiber process from sheep to sweater.  Wool, Warp and Wheel stopped by to give us their take of the event saying it was a great turn out and a whole lot of fun.

Mom managed to get fiber from a few fests this summer, and she is most excited about the Parrot Fish fiber she got from A Good Yarn in Sarasota when she went on her two week long “Abandon Mia-Fest” in June.  It’s a bamboo/merino blend from Nerd Girls exclusively available to A Good Yarn’s Purl Diver Collection, colorways inspired by the sea life in the Gulf of Mexico.  She’s using it for Spinzilla this year, which started Monday.

And as if I wasn’t neglected by her enough, let’s talk about Spinzilla.  A week-long spinning extravaganza similar to Tour de Fleece, contests and prizes for yardage, plying credits, and average time spinning throughout the week are a result of spinners nationwide teaming up to spin up to, if not more than, a mile of yarn.  Spinners can “go rogue’, and enter their bobbins individually, or they can be on a team, like Mom, who joined Team Purl Diver with A Good Yarn in Sarasota, for free.  Each team leader has their own participation prizes and mini-contests throughout the week.  She walked right in here today, got her coffee at Honey Hill, came right back and plopped down at the wheel….and hasn’t stopped since.  I think she went to the bathroom, although it might have been to dash water on her fingers, because they are smokin’!

But it gets weird.

Before all this happened, they were challenged to try to spin Husky fur….and did it.  No, seriously.  Jodi totally did.  I’m a little scared.

I wouldn’t be worried, but it does stand to reason I’ve never seen this dog…and frankly, it’s freakin’ me out a little that Julie keeps stopping in “to say hi” ever since the Great Failed Escape and she comes at me wielding a slicker.

So, if the next time you see me, I’m sporting bald patches, please, for the love of Meow, report it.  Because I think they’re up to no good.  And I can’t help I have such a gorgeous coat.